The Dairy Cooperative in Gostyn, established in June 1889, had its condensed milk and milk powder production facilities opened in 1979.

The Dairy Cooperative in Gostyn, established in June 1889, opened its condensed milk and milk powder production facilities in 1979. 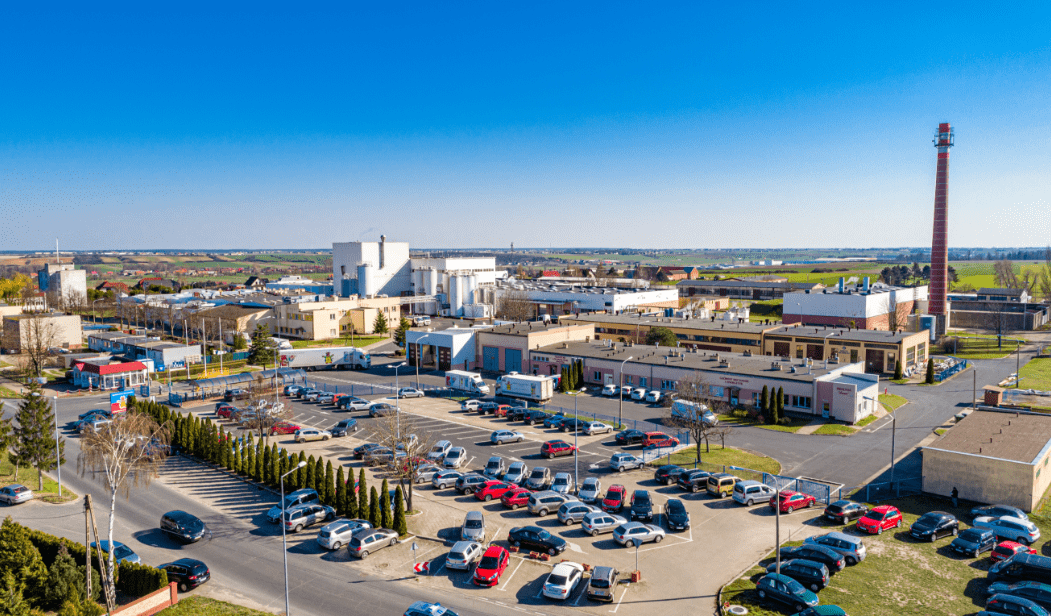 QUALITY
The Dairy Cooperative in Gostyń produces safe, high and repeatable quality dairy products that meet the expectations of customers, in harmonious coexistence with the environment and respect for the law.

FOOD SAFETY
We guarantee the authenticity of our products through partnership cooperation with trusted milk producers, as well as proven and approved suppliers of food additives and production materials of the highest quality. The entire production cycle, from the raw material to the finished product, is subject to strict control, ensuring very high quality and safety of all our products.

ENVIRONMENTAL PROTECTION
In our operations, we apply a preventive approach to prevent environmental pollution and maintain compliance with environmental law and other environmental regulations relating to our Cooperative. Everyone is responsible for the quality of products and environmental impact - from the Management Board to the employees who perform basic activities.

History from the 19th to the 21st century

The Dairy was incorporated in July 1889
In 1919 the Dairy was named the Dairy Cooperative in Gostyń
The Dairy was visited by Ignacy Mościcki, the President of the Second Republic of Poland.
Takeover of the Dairy by the Germans, change of authorities and name

The ISO 9001 quality certificate award ceremony was held in 1998
Centralization of production
Visit of the President of the Republic of Poland, Andrzej Duda, Launch of a new milk powder plant
Launch of the cheese dairy
One of the most recognizable dairy companies in Poland
Certificates

The high quality of products has been confirmed by numerous awards and distinctions. All in all, the Cooperative and its product have been presented with over 100 of awards, medals and distinctions. It should be emphasised that the 500g unsweetened condensed milk was awarded the Gold Medal of Polagra Food International Poznan Fair in 2002, the 500g light unsweetened condensed milk was awarded the Gold Medal in 2003, the same award was presented to the chocolate dessert in 2004, the 250g extra butter in 2006 and the condensed sweetened boiled cocoa milk in 2007. During Polagra Food Fair in 2008 the Cooperative was presented with the Eugeniusz Kwiatkowski Entrepreneurship Award in the Food Sector.

Every year the Gostyn Dairy Cooperative is recognised as one of the leaders in the ranking of domestic dairy cooperatives associated under the National Association of Dairy Cooperatives (KZSM). In 2004 the company was awarded the Exemplary Food Producer Statuette. The motto “Quality is the Only Way” brings a great responsibility therefore, to strengthen the position of the Dairy Cooperative in the market and to improve the efficiency and effectiveness of management, the company implemented a Quality System complying with the international ISO 9001:1994 standard and later, complying with the new ISO 9001:2000 standard and HACCP system, in accordance with Codex Alimentarius in 2000, certified by a renowned company, Lloyd’s Register Assurance Limited. In 1999 the Cooperative was amongst the first group of manufacturers meeting the A category of veterinary requirements and authorised to export products to EU countries. Since 2000 the Cooperative has been exporting goods to the EU markets and presently takes part in the intra-EU exchange of goods.

In 2004 the Gostyn Dairy Cooperative was granted authorization to export goods to the countries of the Russian Federation, in June 2005 the Cooperative received the British Retail Consortium standard certificate, recognized by the retail chains (re-certified every year by Lloyd’s Register).

In September 2007 a new production line for UHT cream and condensed milk in combifitSmall packaging with a modern combiSmart screw cap was put into operation. The combiSmart screw cap is designed to facilitate measured pouring of liquids and the re-closing of used packs.

Our customers are more and more interested in light unsweetened milk with added magnesium or fibre.

For several years now the Dairy Cooperative has been supplying milk in 250g packs to schools in the Wielokopolskie and Dolnośląskie Voivodships under the “Milk for school” programme.